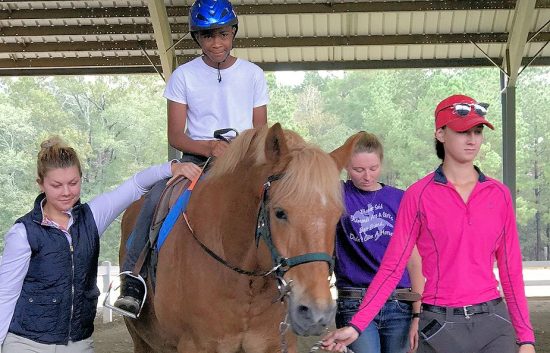 The awesome experience of being a kid

They’re young. Younger than you really imagine. These kids – some barely 9, 10, 11 years old and already conditioned to take it.

When a parent yells at home,
when they fail a test at school,
when they are bullied on the street,
they don’t flinch.

They are conditioned to not let it matter. Their faces show nothing. No pain, no fear, no sadness. And that really is the overriding emotion – sadness – because these are children. Children who should be running as fast as they can, laughing as much as they can, learning and growing into the best versions of themselves.

And that is why this experience is priceless.

They had been coming to the ranch for a few weeks. Before that, some had never been to a farm, never seen farm animals in person, and never ridden a horse. But during their previous visits they met Big Mac, Rusty, and Regan. They learned to groom the horses, rubbing them down and checking their hooves. They learned safety and how to lead. Then they took their first painfully slow walk inside the corral.

Now came the moment: One after another the riders gave the command, then held on as the horses broke into a trot. It was all business – deep concentration as each rider tried to remember the things he had been taught: sit tall, hold the reins gently, keep your eyes on the trail. And when it was over, their faces were jubilant and they crowded their instructor not even trying to hold it in –

Did you see me? Did you see how fast I was going?
I didn’t expect it to kick that fast!
The way it was trotting – it was going then it was GONE!
It started going and I was like ooohhhh! Oooooohhhh!

At the end of the day, they all stood a little taller. They had mastered a new skill, had the thrill of a new experience, and felt the joy of just being a kid.