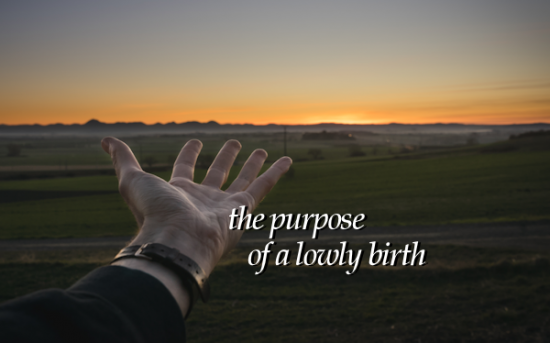 At a recent Saturday funeral, I heard Dr. Charles Wilson speak of Martin Luther’s teaching on “the left-handed power of God.” The next morning I heard Rev. Christi Dye speak of Matthew’s Gospel “burying the lead on the story” by locating Jesus’ birth as the sixth action in a subordinate clause in a compound sentence.

Both beautifully made the point that the entry of God into human history was purposefully humble and ordinary.

Manus dextra is Latin for right handed. From that we derive our word dexterity. To be dexterous is to be wonderfully skilled and polished, worthy of emulation and adoration. Manus sinistra is Latin for left handed. From that we derive the word sinister. Though no one is certain how, over time left handed came to mean underhanded, plotting, and devious.

Martin Luther knew his Latin! He made no mistake talking about God’s left-handed use of power. He stripped the phrase manus sinistra of its devious connotation. In a startling and refreshing way he describes for us how the King of Kings entered into human form not to display dexterity with sword or political power. Rather he came as love, humility, self-effacement, sacrifice, and service. He entered unexpectedly from a direction in which no one was looking!

In an unattributed piece on Luther, Macedonian Ministry speaks of God’s transformative power continuing to be manifested not where the world is looking. Our headlines don’t “bury the lead.” All forms of media point to power, used and misused. It is right-hand power exercised in brutal form that commands our attention. God’s left-hand power, even now triumphant, oft goes unnoticed.

Macedonian Ministry asks us to remember the year 1809. Right-handed power was transforming the world as Emperor Napoleon Bonaparte led his armies across the Austrian Empire. The battles of Aspern-Essling, Eckmuhl, and Wagram were going to be the ones that shaped history. They have, however, become mere footnotes. While cannons boomed and swords flashed across Europe, unnoticed were women giving birth. In 1809, God’s left-handed power delivered to us Alfred Lord Tennyson, Oliver Wendell Holmes, Edgar Allan Poe, and Charles Darwin. And completely unnoticed in Kentucky of all places was born Abraham Lincoln.

It is not the army of Caesar Augustus that continues; nor does the might of Emperor Bonaparte. Rather, what continues is the loving work of the church of our Lord and Savior Jesus Christ. We give thanks to God for Jesus’ life with us and death for us. Let us all take the left hand of the one seated at the right hand of the Father, and overwhelm the world with humility, service, sacrifice, and love.