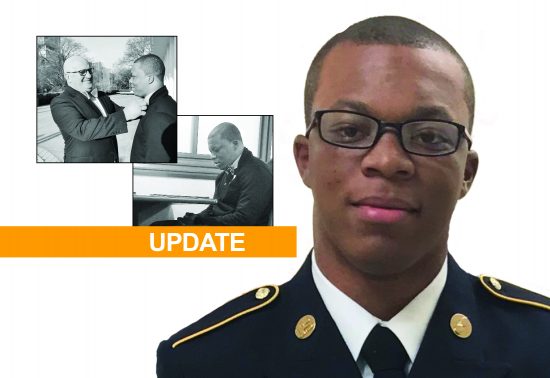 For I am about to do something new. See, I have already begun. Do you not see it? I will make a pathway through the wilderness. I will create rivers in the dry wasteland. Isaiah 43:19

This is the scripture we used last year to introduce you to DeMikael. At that time, he was shopping for a bow tie (his first) and he wanted to get it right. After all, it’s important to look your best when addressing state lawmakers.

DeMikael came to us when a court counselor named Anthony Cobb looked at him and saw an individual with great potential. DeMikael was 16, strong but powerless, bright but invisible. He was a teen just beginning to believe the future could be bigger than the present.

When he moved into our transitional living home, DeMikael found people who believed in him and who worked daily to restore his belief in himself. That’s what DeMikael needed most and, once it was secured, there was no stopping him.

His accomplishments that year went far beyond anything he ever imagined for himself. He found the strength and courage to step away from his former life. He completed high school. He started a job, worked on a farm, and delivered Meals on Wheels. Then he did something few his age could do: He walked into the Legislative Building in downtown Raleigh and addressed members of the North Carolina legislature, telling his story and what he hoped to accomplish. A few months later, having completed our program, DeMikael officially left our care.

We say it that way – that he “officially” left our care – because, even though it was time for him to step out on his own, he remains in our heart. In that sense, he will never leave our care. We will answer the phone when he calls, offer advice and support, and celebrate his milestones. And when something really big happens – such as graduating from Ordnance Corps training – those closest to him will board a plane and attend the graduation.

That was DeMikael’s most recent accomplishment. After DeMikael officially left our care, he enlisted with the National Guard. Soon he found himself at basic training. He called us during the summer for an update and, when we heard graduation was scheduled in September, Mr. Claude, DeMikael’s mentor from our transitional living program, made plans to attend.

DeMikael is back in Raleigh now, ready to start college in just a few weeks. He is a young man who continues to step out and do new things. We are so proud of him – and we know this is just the beginning.

Share some encouragement with DeMikael in the field below: