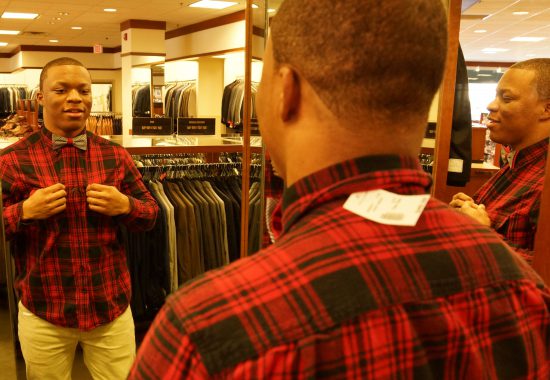 For I am about to do something new. See, I have already begun. Do you not see it? I will make a pathway through the wilderness. I will create rivers in the dry wasteland. – Isaiah 43:19

[spring 2017] When you’re about to do something new, sometimes you need to look the part — so DeMikael is shopping for a bowtie. Tomorrow he’ll stand up in a roomful of state lawmakers, take a deep breath, and tell his story. He’s done everything he can to prepare. He’s rehearsed hundreds of times — practicing in front of the mirror, in front of a camera, in front of the other boys in our Craven Transitional Living Home.

This 16-year-old is doing something new, and it is not easy.

DeMikael was just 10 when he entered the juvenile justice system. He was a follower, tagging after the older guys and breaking into homes for money to buy clothes and shoes. A few years later he was the older guy — the bad role model for younger kids. By 15, he was on his way to youth prison.

DeMikael spent 10 months at Dobbs Youth Development Center before he came to our Craven Transitional Living Home. It was December and he could have gone back home to his grandmother; in fact, he really wanted to go home, but he didn’t. He knew Craven would give him opportunity and distance from his old inﬂuences.

That decision led him to this day, picking out a bowtie and preparing to tell lawmakers the rest of his story:

He’s ﬁnishing his high school degree, working at Popeye’s, and managing his own bank account. He’s volunteering at Meals on Wheels, and studying for his driver’s license. He’s gone on three college tours, and he plans to earn a bachelor’s degree in business and open a shore store. Methodist Home will help him with tuition, living expenses, and mentoring.

At Methodist Home for Children we work with court-involved teens who are at risk of going deeper into the correctional system. We teach them to respect authority and follow the rules, and we challenge them each day, as Isaiah proclaims, to do something new.

DeMikael makes us especially proud with his desire to do better and his courageous decision to tell his story. He can’t change the past, but he can see a life that he never considered before — a future with a college education, a job, and the means to take care of himself. He has seen God’s preferred future for him.