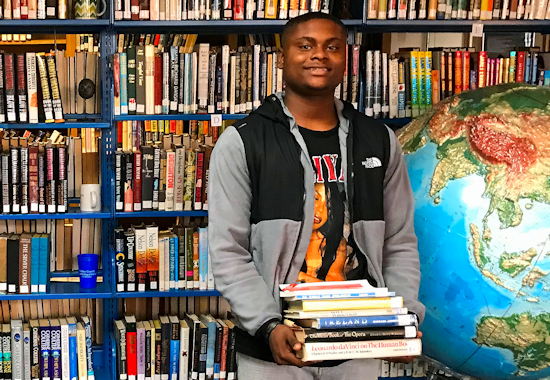 Who do you see?

Chad is 16 years old. He loves sports, and he wants to work in a helping profession.

Coaching is his dream job. Library assisting is his first step.

Chad came to our vocational education program last summer to work with specialist LaVerne Vick on his decision-making skills. When it was time for him to practice what he’d learned, LaVerne made an unlikely match for him. She called on Jeanette Richardson and Beverly Underdue – founders of the local public library.

In a town of 956 people, Jeanette and Beverly operate the library entirely on volunteer power, and they agreed to interview Chad for a position. A couple of weeks later, with their blessing, he started as the library’s new assistant – and he found himself reporting to a volunteer team of grandmother figures. “They were wonderful,” he says. “They understand me. I felt at home.”

For them, Chad inventoried and shelved books. He built tables and chairs. He hooked up the VCR and diagrammed the connections.

He even helped the 4 p.m. jewelry-making class thread glass beads – and discovered his own knack for creating bracelets. He made one for LaVerne and for each of the library ladies as Christmas gifts.

Chad earned references for his next job, and he achieved what we wish for all who come into our care. He found his strengths – the best in himself – and he began to build on them. We are excited to see what Chad does next as he pursues his dreams.

See Chad and his mentors – together here