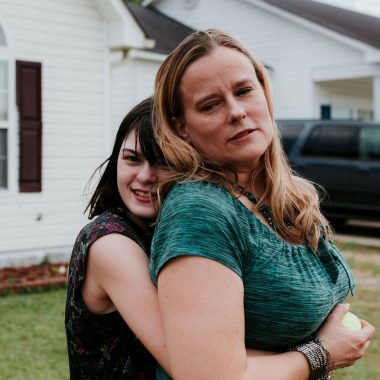 Lorreen and Dan and their two sons were relocating to North Carolina. They were house hunting and, like all homebuyers, had a checklist of features. The house had to accommodate their mobility – both sons have spina bifida and wheelchairs are their primary mode of transportation. And it had to be big. They were a family of four, but Lorreen and Dan had decided to become foster parents.

When they found a house they liked, they prayed together and looking up, they both just knew. Dan spoke first. “We’re going to live here. And we’re going to get three kids.” Lorreen responded, “Two girls and a boy.” And so their story begins.

The kids are arm wrestling in the front room. When Halie is pinned, she calls out “Whoopsie-daisy!” and her laughter fills the air. Anyone who has known her longer than a year knows this is nothing short of a miracle.

Lorreen and Dan met Halie two years ago when she came to their home for a one-week respite visit. They knew she had hemiparesis, or left-side weakness, a result of a congenital brain disorder and they knew this limited her ability to communicate. But they didn’t know how much pain she had.

She was terrified of Dan, all men really, because of abuse she suffered while living with her biological mother. She couldn’t regulate her emotions or make attachments. She felt loss and confusion at being separated from her home, her mother, her aunt, and two siblings. And because she could communicate none of this, she raged.

It would be great to say that Lorreen and Dan loved her through it, but that doesn’t tell the full story. They loved her, yes, but they also gave her a safe home, medical interventions, consistency, and stability. She improved, then thrived. And it was at that point Lorreen and Dan learned Halie had a brother and sister, each living in a different foster home.

“When I heard this,” Dan says, “I just looked at Lorreen and said, ‘We can’t let these kids separate.’ ” Soon they were visiting one weekend a month; then two. They would play together before returning to their foster homes. Over time, the siblings became comfortable together and with Lorreen and Dan and their two sons. And then the phone rang.

“Methodist Home for Children called and asked if we would be a family to all three,” Dan says. “And I replied, ‘Abso-fricking-lutely.’ ”

Last December, the teens were adopted in a ceremony uniquely styled for this family. Halie brought her baby doll, who was also officially adopted – and they unapologetically laughed and cheered. They had  come a long way and were joyously committing to a lifetime of family. 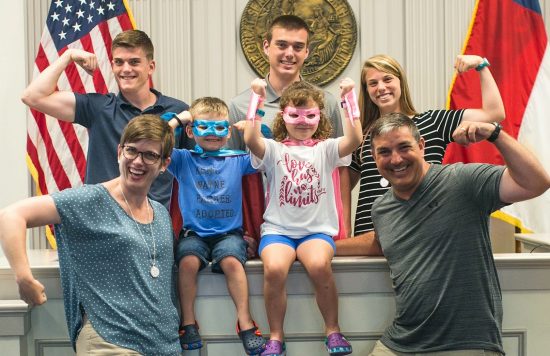 They had done this. Kevin and Susan had raised three children into their teens already, so a couple of toddlers couldn’t do anything to surprise them. Right?

On his first day alone with Alexis and Jamie, Kevin turned his back for just a moment while the kids were in the kitchen. When he looked again, he saw the 2- and 3-year-olds “showering” in the water dispenser on the refrigerator.

The last time Kevin had parented preschoolers, his refrigerator didn’t even have a water dispenser. Now he and Susan were discovering all that had changed since their own teenagers were young – and suddenly remembering how relentless young children can be.

“They were everywhere,” Susan says.

Susan and Kevin were new to foster care then, but they were ready to jump back into the preschool hustle of car seats, diapers, and potty-training. They knew the first days with Alexis and Jamie would be chaotic. They were prepared for the demands of parenting neglected children who’d lost everything. Alexis missed her birth mother, and both struggled to sleep.

Today Alexis and Jamie are bright, happy kids – still everywhere, eager to try new things. They were adopted this summer and live every day secure in the love of their parents, Susan and Kevin, and their siblings Jacob, Emily, and Sam.