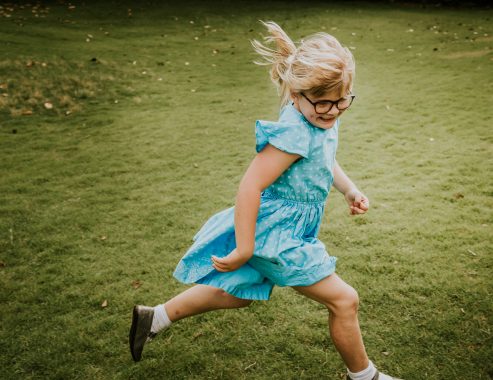 Your first child is born, and you discover that your heart can love in a new gear; one you’d never imagined. Your world shifts to this tiny person and her every first move.

Margo and Ken were as prepared as any new parents could be when Adelind arrived seven years ago. They are planners and doers, and they knew what to expect – until none of it went as expected.

Adelind had unexplained illnesses as a baby, including pneumonia. Her body was floppy even by infant standards; at 6 months she started to miss milestones for normal development. Delays were diagnosed by her doctor, but nothing explained why – or if and when she would catch up.

Her first-time parents were overwhelmed by the unknowns. But fortunately for Adelind, her mother is “persistent as all get-out.” Margo placed Adelind at our Jordan Center when she was 1½ years old and pushed on for an answer to her child’s global developmental delays.

The answer was not something we could provide as early childhood educators. We didn’t know why Adelind couldn’t speak or make sounds, or why she struggled to control her movements. But we could provide this – a team that loved and encouraged Adelind and her parents. We became family and helped tackle their issues together, making Adelind’s classroom a welcoming home away from home and sharing strategies for parenting and therapies.

It took two rounds of genetic testing before Margo and Ken got their answer: Adelind was born with a mild case of Kleefstra Syndrome, a condition so underdiagnosed at the time that only 500 cases worldwide had been confirmed.

Today, Adelind talks a blue streak, and she has no self-consciousness about expressing herself in her own way. She makes up stories and acts them out on the spot. She reads above grade level and, to the delight of her “word nerd” mother, spells like a champ.

“We set out from the beginning – obviously every parent does – to have a child that is healthy, happy, and lives independently,” Margo says. “We’re still aiming for those three things, to help her be the very best she can be, and the foundation that was built for her at the Jordan Center is just amazing.”