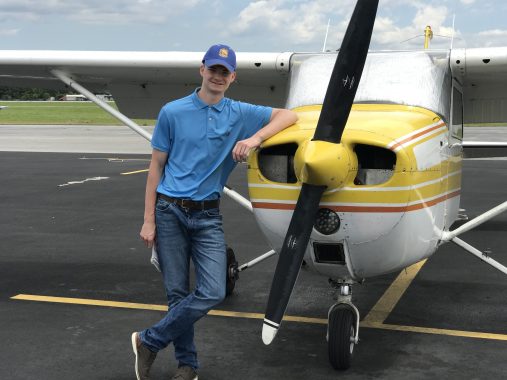 Give Joseph some encouragement! Use the Leave a Reply field, below.

Before he had ever ridden in a plane, he knew. He’d watch them fly overhead and feel a thrill all the way through his bones. When he grew up, he decided, he was going to be a pilot. He was going to fly.

But life is bumpy.

While he was still a teen, Joseph found himself in our care. Parts of him were broken, dreams cast aside, a future no longer imaginable.

How do you heal that?

We know that goals guide and motivate behavior. Research shows that goal setters see future possibilities. In life, they are the ones who soar.

One day, Joseph confided to our counselor about his long ago dream. As they talked, his energy expanded. He became animated, engaged and – for the first time, really – she saw the man he could become.

And so it was that on a beautiful summer day, we took Joseph for his first flying lesson. He learned the basics, reviewed the flight plan, walked through the checklist, then – along with his instructor and our counselor – he
climbed in, buckled up, and took flight.

It lasted only an hour, but it was enough. His dream was back and this time, it felt attainable.

As he flew over the Crystal Coast, Joseph saw a world full of beauty and opportunity. He began to understand that life can be hard but it can also offer a second chance. And he stepped off the plane with a goal: He would do the work and make something positive of his life. He would join the military and become a pilot. He would soar.