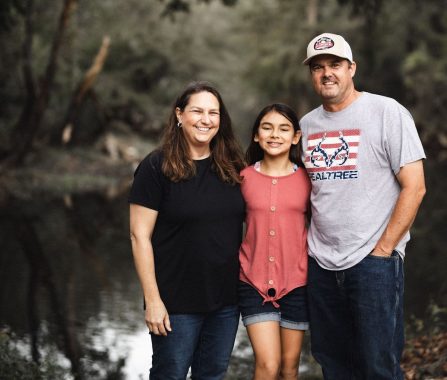 All that is gold does not glitter;
Not all who wander are lost.
The old that is strong does not wither.
Deep roots are not reached by the frost.— J.R.R. Tolkien

She was a full-time mom; he was a youth director. They were married, had two girls, and were happy and content. Then an idea got into their heads and would not go away. For 10 years they prayed. At last a door opened and their prayer – to
start a summer camp in eastern North Carolina – became a reality.

Starting a camp led Desta and Sammy to the heretofore unimaginable idea of becoming foster parents. Foster parenting
led them to Maria. And Maria is the spirited, big-hearted, animal-loving daughter at the center of their lives today.

For I know the plans I have for you,
declares the Lord, plans to prosper you
and not to harm you, plans to give you
hope and a future.— Jeremiah 29:11

You probably know this beloved verse by heart. It was originally spoken by Jeremiah to offer hope to God’s people in exile; today we read it at baby baptisms. It is also appropriate for this story about Desta and Sammy. Becoming adoptive parents by way of starting a camp may seem a bit circuitous, but wandering down this path prepared them for a higher calling, one they had never imagined.

Desta and Sammy wandered, but they were never lost. Instead, deeply rooted in faith, they were open and receptive to God’s plan, a plan that fills us all with great hope for the future.